Quake Saber
Tuojiangosaurus forms a glowing crystal sword on its tail, which it uses to slice through its opponent!

Although they lived in different places, this herbivore looked a lot like the Stegosaurus. It had two rows of plates on its back.

[Defender] When your opponent attacks one of your Dinosaurs, you can Dino Slash this Dinosaur from your hand. Then, this Dinosaur is attacked instead.

Tuojiangosaurus was summoned by Foolscap and immediately given its Spectral Armor form in Ancient Japan during There's No Business Like Shogun Business to attack the D-Team alongside Gabbro's Pentaceratops. They chased the D-Team out into the battlefield in the Battle of Sekigahara, fighting with Paris and Ace in their DinoTector forms. When the Japanese soldiers attacked Gabbro and Foolscap, Tuojiangosaurus used Quake Saber against them. After Gabbro was knocked away by Paris, it tried using Quake Saber to attack her, but she used Green Impulse, her and Tupuxuara together destroying its Spectral Armor and defeating it. Its card was presumably reclaimed by Zoe.

Several recolored wild Tuojiangosaurus were encountered by the D-Team during the Jurassic Period in Bad Deal. They fled from the forest fire caused by Gigas' Magma Blaster. They were seen again the next episode around a lake after the Backlander had returned and put the fire out.

Not much is known about the personality of Tuojiangosaurus since it was under the control of the Space Pirates when it fought the D-Team. In its short appearance, it doesn't display more than average power, more occupying rather than actually threatening dinosaur opponents, though much of its presumed battle took place offscreen.

Tuojiangosaurus starting to use Quake Saber on Paris 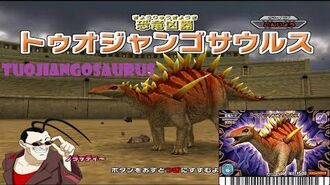