Pawpawsaurus has two appearances in the arcade, first as a Normal Move Dinosaur and later as a Secret Dinosaur; its arcade nickname is different in each version but has the same arcade comments.

Tag Team
An extremely durable Pawpawsaurus jumps in and takes your place in the line of your opponent's attack, whether physical or Move Card!

[Pawpaw Power]
Neither player can lose Life Points through the effects of card abilities.
(This Dinosaur can use Super Moves from any Element. However, it must still meet any other card requirements.)

Pawpawsaurus's Move Card, Tag Team, was found by the Alpha Gang near the Temple of the Moon in Temple Tempest, who had Terry use it to counter Chomp's Lightning Strike. After that, Pawpawsaurus stuck around to block Terry from all of Chomp's physical attacks and Moves, not even Electric Charge letting him push past. It stopped the D-Team from following the Alpha Gang to the Temple of the Moon before being called back.

Later that episode, Tag Team was used to block Ace, Pawpawsaurus even taking Terry's place in the middle of Ninja Attack to protect him. When the Crystal Skull was displaced, causing the temple chamber to start collapsing, Pawpawsaurus used itself to try and jam the mechanism lowering the ceiling by standing under and holding up a lowering stone wall, at which point the Alpha Gang made their escape, leaving it behind. The D-Team tried pushing a large rock in to hold the wall and let Pawpaw get out, but it returned to its card when the Alpha Gang returned Terry (since he was the one who used the Move). The card tried to float back to the Alpha Gang but was blocked by a wall of rubble and fell, Chomp picking it up. Once outside, Max had Chomp use the Move so that Pawpawsaurus could be honored by the locals for saving their temple (its summoning is the only time Chomp uses a Normal Move in the anime).

In Dinosaur War!, a wild Pawpawsaurus was brought into the present by the Backlander's malfunctioning time circuits, but was sent back after the circuits failed.

In the finale, Dr. Z rescues one from the Space Pirates' ship and it joins his Dinosaur Kingdom, being seen in the Backlander's Mesozoic forest projection.

Pawpaw Lovelove in the arcade

Pawpaw Rolling in the arcade

Pawpaw Press in the arcade

Pawpawsaurus when Tag Team is used

Pawpawsaurus page on a promotional page of the DS game 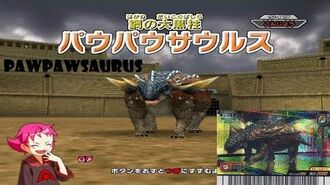