The largest pachycephalosaurian, Pachycephalosaurus is also the most well-known (by the public) of them. Despite this, it is only known from skull material. The maximum estimated size of the dinosaur has also decreased over time, but is still uncertain.

Laser Ray
Pachycephalosaurus charges and unleashes a thick beam or radiating cone of rainbow energy from its thick head dome at its opponent!

[Headbutt] When you Dino Slash this Dinosaur, you can return one of your opponent's Dinosaurs in play to their hand.
(This Dinosaur can use Super Moves of any Element. It must still meet any other requirements.)

Pachycephalosaurus size compared at Max in the encyclopedia

Pachycephalosaurus was raised from an egg by Dr. Z in the Backlander/Zeta Point at an unclear point during Dr. Ancient's mission, where he often headbutted him. He had a Move Card fused into his head dome, making it into a natural ability of the dinosaur and turning him into the first Secret Dinosaur.

In Child's Play, his card was activated in Pisa, Italy, from sunlight reflecting off a window after a rainstorm. He ran amok, straightening the Leaning Tower of Pisa before running all the way to Rome and causing more trouble there. The D-Team sent Ace after him, but he outran Ace and knocked a line of columns down at him, forcing Rex to call him back. Pachycephalosaurus then ran after the sun, coming across the Alpha Gang. Dr. Z expected him to return to his ownership without question, but when he sent him after the D-Team, he instead ran to a glinting window. Dr. Z climbed up onto him, but he thrashed and threw the doctor off, chasing after the glint off an airplane. Reaching the Colosseum, Dr. Z sent an Alpha Ball to subdue Pachycephalosaurus, but he broke it and attacked. Spiny, Terry, and the D-Team's dinosaurs were summoned, but he ran up the audience seats toward the sun, chased by Spiny. He left Ace to get defeated by Spiny's Tail Smash, getting angry and defeating Spiny when clouds covered the sun; thinking everyone an enemy, he raced over to attack Chomp. Terry and Chomp tried to attack him with Neck Crusher and Lightning Strike, but he charged and fired Laser Ray, defeating Terry and hurting Chomp. But then, Pachycephalosaurus seemingly remembered his bond with Dr. Z, humbly approaching and letting him grab and hug his head…and then, like he had as a child, tossed his head up, launching Dr. Z into the air. However, then the clouds opened and the sun peeked through, and he raced to the top of the Colosseum stands and leapt into the air, using Laser Ray at the clouds before using up too much of his energy, returning to his card as he fell. Ursula grabbed the card, but Dr. Z fell onto her from being thrown, and the card dropped to Max.

In the finale, Max gave the Pachycephalosaurus card, along with the other Secret Dinosaurs, to Jonathan, who delivered them to Rex; Zoe then summoned him against the Black T-Rex. Dr. Z jumped onto his back, but Pachycephalosaurus flailed and eventually threw him off. He used Laser Ray as part of the Super Fusion Move that helped defeat the Black T-Rex after the third hit.

A recolored wild Pachycephalosaurus aided Chomp in fighting Terry when Dr. Z sent him after dinosaurs in the Cretaceous Period in Alien Parent Trap.

According to Dr. Z, Pachycephalosaurus was gentle and trusting as baby, even though he often gave the professor headbutts; this was either a sign of affection or a hint he didn't reciprocate Dr. Z's love. He was a very powerful fighter, but had little interest in fighting, instead letting himself be distracted by everything that reflected light, rushing to it but often breaking it in the process. Drawn to light sources that matched his glowing head dome, however, he became angry if anything got in his way when chasing them, but only fought to remove the obstacle. He showed little heed to the difference between friend and enemy, attacking every other dinosaur, but had admittedly been attacked by the Alpha Ball and was justifiably angry. He is also seemingly unaware of his ability to expend more energy than he has, especially by overusing Laser Ray.

He was particularly hostile towards Dr. Z, repeatedly disobeying, running from, or violently reacting to contact with him. Though he seems to warm up after the Colosseum battle, it's not entirely clear whether he really hated the professor or was simply repeating the headbutting action from his youth when he throws Dr. Z into the sky. Even when summoned by a Stone, though willing to follow orders, he still dislikes contact with Dr. Z enough to throw him off again when the professor climbs onto his back. Considering the fact that Dr. Z fused a Move Card to his head dome to turn him into a Secret Dinosaur, it can be hypothesized that his behavior was due to suffering psychological trauma from the experiment.

Laser Ray in the anime

Head Driver in the arcade

Quake Hit in the arcade

Pachycephalosaurus page on a promotional book of the DS game 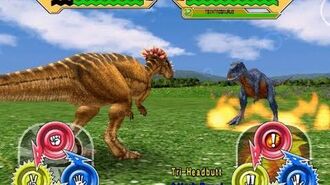