Megalosaurus was the first ever dinosaur discovered that was realized to be one, and was one of the first three animals classified in "Dinosauria" alongside Iguanodon and Hylaeosaurus. There have been a total of 55 different species of Megalosaurus named, but most are now considered other dinosaurs or invalid, as all theropod-like fossil animals used to be named "Megalosaurus something". Because of this, little fossil material of the true animal is actually known, so most of its appearance remains unclear. A 2010 study ignoring outlier specimens greatly shrunk its size estimate from the classic 9-10 meters (30-33 feet) also used in Dinosaur King to only 6 meters (20 feet).

[Squeeze] Each player's maximum hand size becomes 5. (Instead of 8)
(This Dinosaur can use Super Moves from any Element. It must still meet any other requirements.)

Megalosaurus size compared at Max in the encyclopedia

Like the other Secret Dinosaurs, Megalosaurus was raised by Dr. Z at an unknown point during Dr. Ancient's expedition. He was quite violent as a child and became impossible to tame as an adult, so Dr. Z sent him back into his card and stuck it inside a book for a timeout, but forgot all about him.

Eventually, in Santa Saurus!, Dr. Z accidentally found the card again, giving it to the Alpha Trio to take back the D-Team's dinosaur cards. Reaching the D-Team, Ursula accidentally let the card activate by holding it up by a display of multicolored Christmas lights, and Megalosaurus immediately triggered a Time Warp Battlefield. Like he was as a child, Megalosaurus went on a mad rampage, quickly defeating Ace with Zero G Throw and putting everyone in danger from a meteor shower (that may have been an anime-only ability, or just part of the Battlefield called on by his rage). However, Chomp hit him with Thunder Bazooka and knocked him on a sled (from a Christmas display) into a set of boulders, which defeated him, allowing Rex to claim the card. It later made its way into Max's Dino Holder.

In Dinosaur War!, Max gave his card with the other Secret Dinosaurs to Jonathan to deliver to the others, where Laura summoned him to fight against the Black T-Rex. He used Zero G Throw as part of the Super Fusion Move that defeated it after three hits.

Foolscap summoned another Megalosaurus in The No-Fun Shogun to try and scare off the female ninjas attacking him and Shogun Tokugawa, but it ended up fighting against the Deinonychus trio sent out by Shear, who had amnesia and was now allied with the ninjas. Megalosaurus used Gigantic Fall, but the Deinonychus dodged the attack. They then used their signature 1-2-3 attack chain, Megalosaurus leaning away from Whip Attack and avoiding two of the three Spinning Attack hits before being defeated by a strike from Crossing Attack from behind. Its card was presumably reclaimed by the D-Team in the aftermath.

Shear was briefly seen holding another Spectral Armor Megalosaurus card in a handful of other repeats in The French Conniption, but never used it, only summoning Rajasaurus. It was probably liberated along with the other dinosaurs when the Space Pirates were finally defeated.

According to Dr. Z, his Megalosaurus was very violent as a child and later as an adult was uncontrollable. Whether this behavior was natural or, as with Pachycephalosaurus, was due to the experiments and treatment by Dr. Z is unknown, but since Megalosaurus' skills are based on telekinesis, it can be assumed that Dr. Z converting him into a Secret Dinosaur may have affected him mentally. However, his aggressiveness didn't show when summoned by a Stone in Dinosaur War!, obediently following Laura's orders. Since he was just as aggressive when summoned in Dr. Z's flashback as when activated without a Stone, it can be assumed that, like most Secret Dinosaurs, he was deliberately disobedient to the professor. Though strong offensively, he doesn't seem very resilient, being defeated rather easily for his size, though he may have recklessly tired himself out like Pachycephalosaurus had.

Not much is known about the personality of Foolscap's Megalosaurus, as it was under the control of the Space Pirates. Like all Secret Dinosaurs, it is a powerful fighter, but seems to have difficulty in dealing with fast, agile opponents, being unable to effectively fight against Shear's Deinonychus, though did far better at dodging their attacks than Terry had against Dr. Z's Deinonychus.

Megalosaurus as a child

Rampaging Megalosaurus charging through a boulder

Megalosaurus as seen in the arcade game

Zero G Throw in the anime

Gigantic Fall in the anime

Psychic Bind in the arcade

Megalosaurus on a promotional magazine

Megalosaurus on a promotional magazine 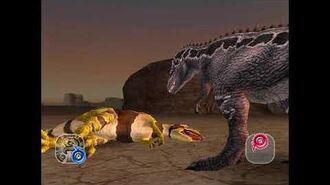