A recent study claims that Lexovisaurus was based on nondiagnostic remains (not unique enough to be distinguished from relatives), so most later fossils have been reclassified under the name Loricatosaurus, though some scientists disagree with this conclusion.

Lexovisaurus was only available in the Japanese version.

Sand Trap
Lexovisaurus summoned a pool of quicksand under it's opponent's feet, rendering them unable to escape! It was defeated before the erupting sand mountain part of the Move activated, so it's unclear if this part was meant to be present.

[Armored] When this Dinosaur loses a battle, you can discard 2 cards. If you do, this Dinosaur stays in play. (You don't lose any Life Points from that battle.)

[Super Survival] When this Dinosaur uses a Super Move and wins the battle, you can return 1 of your other Earth Dinosaurs in play to your hand.

[Armored] When this Dinosaur loses a battle, you can discard 2 cards. If you do, this Dinosaur stays in play. (You don't lose any Life Points from that battle.)

The pointed spikes that ran along the back of this dinosaur and the long spines on each of its shoulders gave it a ferocious look even though it was only an herbivore.

He was summoned by Shear in Princess of the City to scare away the 40 Thieves bandits while trying to kidnap Zahrah from them. It fought against Chomp, but when Zoe led Zahrah away, Shear gave it its Spectral Armor form to defeat Chomp with a ramming charge, knocking him into a stone wall. It then used Sand Trap to catch Paris, Zoe, and Zahrah. However, Ace used his DinoTector form and defeated Lexovisaurus with Hurricane Beat, destroying its Spectral Armor. Rex presumably reclaiming its card.

Not much is known about the personality of Shear's Lexovisaurus, since it was under the control of the Space Pirates when it fought the D-Team. It showed itself to be an unusually strong dinosaur for its size, easily defeating Chomp in one hit, even if it was partly because it was wearing its Spectral Armor while Chomp had no Element Booster.

The wild Lexovisaurus in Bad Deal was a friendly dinosaur, but not much is known since it only appeared briefly in the episode.

Lexovisaurus scaring away a bandit

Wild Lexovisaurus from the Jurassic with Chomp 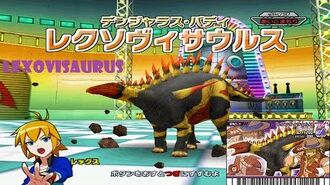