Lanzhousaurus was only available in Japanese version.

Power Drain
Lanzhousaurus sucks away a large chunk of its opponent's energy, burping as they collapse!

[Super Heal] When this Dinosaur uses a Super Move and wins the battle, you gain 1 Life Point.

Lanzhousaurus was summoned by Shear in The Third Cosmos Stone in a cave to head off the D-Team, who were closing in on the Purple Cosmos Stone. It used Power Drain to suck away a lot of Chomp's energy, being given its Spectral Armor form alongside Gabbro's Carcharodontosaurus when Ace joined the battle, him and Chomp getting their DinoTector forms. Ace used Cyclone from behind to throw it into a wall, and Chomp defeated it with Ultimate Thunder, destroying its Spectral Armor. Its card was probably reclaimed by Max.

Not much is known about Lanzhousaurus' personality since it appeared so briefly in the episode and was under Space Pirate control when it fought the D-Team. It was never shown in physical combat other than getting snuck up on, so its fighting prowess is unknown, but choosing a ranged Move to weaken its opponent may indicate it to not be particularly strong. 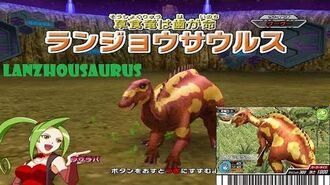