All pages follow a conformity guideline for easy reading. What this means is that all pages of one type (Characters, Dinosaurs, Episodes, etc.) look the same as another of the same type.

Fan based opinions are strictly against rules. Thus, saying that you hate or love a certain character or dinosaur will most definitely be removed. Also, if you say something that you think will be funny, it won't, and it will be promptly deleted.

All images must be Dinosaur King related. Also, they must have a Fair Use tag:

This file is copyrighted. It will be used in a way that qualifies as fair use under US copyright law.

because these images do not belong to the uploader.

The only special case is with User:JP:OGFreak, because his non-canonical chibis have been approved on this Wiki because he has agreed to the watermark rule. Also, an old poll showed that the majority of viewers at the time wished to keep his images on the Wikia after a user spoke up against their placement.

All self-created images must have a watermark placed on it to prevent art theft. For example: 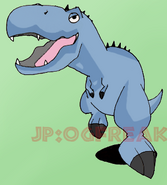 this is a watermarked image
Add a photo to this gallery

Self-created images that do not have the watermark will be removed. Also, copyrighted images made by specific artists, such as Bob Rivard, must also be watermarked with THEIR name on it.

All fan art displayed may NOT be used without the original artist's permission. All approved fan art must have a {{permission}} licensing or a {{self}} if you are an approved exception. All Dinosaur King cards were from Kyoryu-King Cards or from the Taiwanese Cards, and the full-sized dinosaurs were from Kyoryu-King's Dino Museum and Special Dino Museum. No cards from the UK official Dinosaur King website may be used, as they are all copyright protected and DinoQueen13 will be obligated to ban or warn you.

The three templates that are used for all other pictures must be: {{Template:Fairuse}}, {{Template:Copyright-Sega}} or {{Template:From Wikimedia}}. Fairuse means that the image was one you took off of the Internet or from another resource, that you didn't make it yourself, and that it is copyrighted (everything on the Internet is copyrighted). From Wikimedia means that the image was taken off of Wikipedia or another Wikipedia-related site.

Videos are credited to uploaders on YouTube, and must have the video's creator in the title when it is posted here. All of TheSellerofJapanceseC's (TSOJC) videos are for promotional uses only.

Also, the original uploader's username must come before the video's name.

A user may only receive 1 warning before they are banned. Usually, the warning will be for these reasons: Vandalism, Spam, Copyright Violation, or Unrelated Information. Minor offenses may only receive warnings unless said warnings are repeatedly ignored. Egregious offenses in content or scale will receive no warning, as it clearly wouldn't make them stop.

Bans will occur when a user or an IP user has breached the rules with intention. Also, being rude to other members (in a huge rant, without reason or because one just feels like it) will result in a ban.

For example, this is a type of message that will get you banned: "You are always deleting everything I do so stop. By the way you really need a favorite dinosaur. I have one and it is Carnotaurus. I don't know why I am saying this because you are probably going to delete this too. Well anyway from now on if you or anyone deletes anything I do on the Carnotaurus page I am just going to keep putting it back until you guys stop deleting it. I hate you."

Those who are currently banned will be visible on this self-updating page: Special:BlockList, along with the reasons. The duration of the ban will be based on the type of offense, the number of times it was committed, and/or whether it was continued even after they were directed to stop or even previously banned for the same offense. For example: 1 week per spam edit for first time offenders.

These bans are given once too many people have done a specific kind of offense and it has become an epidemic. A previous annoyance has been "Category spamming", repeatedly adding incorrect categories to different pages, most notably Category:Fire Dinosaurs for some reason. What qualifies under this changes with time and spam editing habits.

Permanent bans will be issued to the worst of the worst offenders. Appeals from perma-banned users are almost guaranteed to be ignored on principle.

Retrieved from "https://dinosaurking.fandom.com/wiki/Dinosaur_King:Rules?oldid=53667"
Community content is available under CC-BY-SA unless otherwise noted.