Diceratops is now officially named "Nedoceratops" (sometimes unofficially "Diceratus"), but it may instead be a species of Triceratops (or the only known skull may belong to a Triceratops individual with a bone growth defect that made it lose its nose horn). The genus name "Diceratops" was preoccupied by a type of hymenopteran insect.

[Super Bolt]
When this Dinosaur uses a Super Move and wins the battle, you can choose 1 of your opponent's Dinosaurs. It loses all abilities until the end of the turn.

Diceratops was first summoned in Dinosaurs of the Caribbean by Gabbro in his Spectral Armor form to back up Edmontonia in fighting against Ace, but then Terry showed up in his DinoTector form. The four battled, but after Edmontonia was defeated and reclaimed by the Alpha Gang, Ace knocked Diceratops to the ground, where it accidentally stepped on the map that chibi Chomp was holding, who tears it in half. Diceratops was then recalled and the second half of the map was snatched by Gabbro.

In the next episode, Diceratops was summoned to chase away a "sea monster" in front of Blackbeard's pirate ship, but it turned out to just be a rock, and he was recalled again. He was later summoned to fight against Paris on the beach in his Spectral Armor form, but she used her DinoTector form and, after an evenly-matched physical battle, Paris eventually defeated him with Ultimate Leaf, destroying his Spectral Armor and letting Zoe reclaim his card.

Not much is known about the personality of Diceratops, since he was under Gabbro's control when he fought the D-Team and the Alpha Gang. He is a good fighter, but only seems to be evenly matched with Paris for brute strength, who, while solidly strong, is far from the most powerful main dinosaur.

Diceratops on a Blitz Counter card 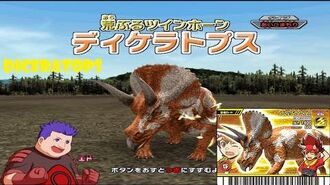