Note: Although long considered to be a species of Apatosaurus, a 2015 study concluded that the original species of Brontosaurus excelsus was distinct enough from the type species Apatosaurus ajax to be reassigned to its own genus, taking two other former Apatosaurus species with it; it is unclear which if any particular species Dinosaur King's model was based on.

Various Dinosaur King media alternately call this dinosaur "Brontosaurus" and "Apatosaurus", and they are used interchangeably on this page.

Megawatt Stomp in the arcade

Electro Launcher in the arcade

Arc Discharge in the arcade 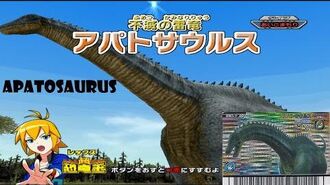