The Alpha Gang (アクト団 Akuto-dan, Mission Act) is a group from 2126 AD. Dr. Z, their leader, wants all the dinosaurs so he can build his own Dinosaur Kingdom and rule over it as the Dinosaur King (the same as the title of the series). They also want the six Element Stones to summon and control the dinosaurs. They are based at Zeta Point for all but the last few episodes of Season 1 of the anime. Unless otherwise noted, most of this page concerns the anime exclusively, as it is their most expansive portrayal.

The Alpha Gang are the main antagonists of early version story campaigns, each member facing the player with dinosaurs of a certain Element with Dr. Z as the final boss. They are in the past trying to capture all of the dinosaurs, and the D-Team is brought back in time by a mysterious stone to stop them. Mid-campaign, Rex is captured, so Max is joined by Zoe at the Alpha Fortress free him, destroying the base with Lightning Strikes as the Alpha Gang retreats.

The Alpha Gang are the main antagonists of the original series, based at the artificial island Zeta Point, trying to capture the newest dinosaur of the episode or going after some other object of value. Their main agents, the Alpha Trio of Ursula, Zander, and Ed, are bumbling idiots and bad at their job, often failing in comedic ways, though Rod and Laura are later secretly dispatched by Seth to much greater effect, having otherwise been confined by the maid, Helga, to keep up on their homework. The Alpha Gang members were initially part of Dr. Ancient's team who used the Backlander timeship powered by the Stones to travel to the Mesozoic and preserve dinosaur species from the extinction, but had mutinied mid-mission, resulting in the ship crashing in the present and becoming Zeta Point, scattering the gathered dinosaur cards across the world. During the finale arc, however, Seth betrays them for his own purposes and the Alpha Gang joins with the D-Team to defeat their common enemy. They subsequently "rebuke their evil ways" and become good(-ish), staying on-and-off allies of varying usefulness throughout the second season, and though late-season Dr. Z tries acquiring the Cosmos Stones to become Dinosaur King, his efforts don't get very far.

The Alpha Gang often uses Alpha Droids to assist in their missions, overly-obedient robots who are rather clumsy and only as smart as the person controlling them (who, typically, isn't that smart). The Alpha Trio usually arrives at the new dinosaur location in a one-off vehicle built by Dr. Z. Dr. Z was also the original inventor of Move Cards and "recreates" several at the beginning of the season for the Alpha Gang's usage. Additionally, all 4 (6, counting the Deinonychus trio as 3) of the Secret Dinosaurs of season 1 were created, raised, and trained by Dr. Z, and all end up outright hating his guts for the trouble (though Therizinosaurus and maybe Pachycephalosaurus come around by the ends of their episodes).

The Alpha Gang summon and control dinosaurs with Alpha Scanners powered by a Stone. They own Terry (Tirano) the Tyrannosaurus, Spiny (Spino) the Spinosaurus, and Tank (Saika) the Saichania. Terry was already with them at the first episode, implying his card remained after the Backlander crashed, along with the Fire and Center Stones; Spiny, Tank, and the Water and Earth Stones were retrieved in rapid succession. Despite defeating numerous others throughout the season, the Alpha Trio was only able to claim five more dinosaurs and several Move Card dinosaurs, but lost them all, typically within 1-3 episodes. Rod, Laura, and Seth later stepped in and successfully caught 3 dinosaurs (Saurophaganax, Stegosaurus, and Ampelosaurus, as well as the enigmatic Velociraptor card) and were able to keep them until the finale arc, when Seth's betrayal (taking Saurophaganax) forced them to side with the D-Team. In the battle against Seth's Black T-Rex, Rod, Laura, and Dr. Z summoned several other dinosaurs like Euoplocephalus and Daspletosaurus alongside the D-Team as a small dinosaur army; Rod and Laura then used Megalosaurus and Deinonychus after Jonathan delivered them to Rex.

In Mesozoic Meltdown, the Alpha Gang teams up with the D-Team partly to reclaim the Space Pirates' dinosaurs, but also mostly to get the Cosmos Stones, though their missions typically flounder in the background of the episode. Just like in Season 1, they acquire very few new dinosaurs (into a group collection with the D-Team instead of for themselves), only claiming Edmontonia, but they use Anhanguera (Anhanguera Dive) obtained by the D-Team and reuse Futabasaurus. They also get several new Move Cards from Dr. Z, but only their Ultimate Moves manage to defeat some dinosaurs of the Space Pirates'.

The Alpha Gang arrives and steals a DinoShot and Tyrannosaurus card, becoming the main antagonists of the game. Their Alpha Droids controlling dinosaurs are random encounter opponents, with their members being mini-bosses for each area. Dr. Z is the final boss.

Due to the Stones in their possession, they are also able to control any Fire, Water, and Earth Dinosaurs, but the Alpha Controller makes it possible for them to control any dinosaur after they run its card through the machine.

When being sent around the world to find and capture wild dinosaurs, the Alpha Gang uses a variety of homemade vehicles of varying, often dinosaurian designs which often crash or otherwise break or fail, though sometimes they rely on public transport (when they can afford it).

Alpha gang (Dr Z and Ursula and Zander and Ed) 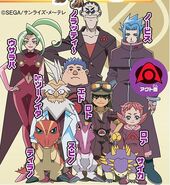 The Alpha Gang in the original, their names in Japanese 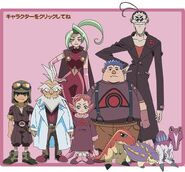 Retrieved from "https://dinosaurking.fandom.com/wiki/Alpha_Gang?oldid=53032"
Community content is available under CC-BY-SA unless otherwise noted.